Home » Foosball » Is Foosball a Sport?

Because foosball is so accessible to many different players of varying ages and skill levels, there is often argument about whether or not it is really a sport or simply a table game that anyone can easily play. 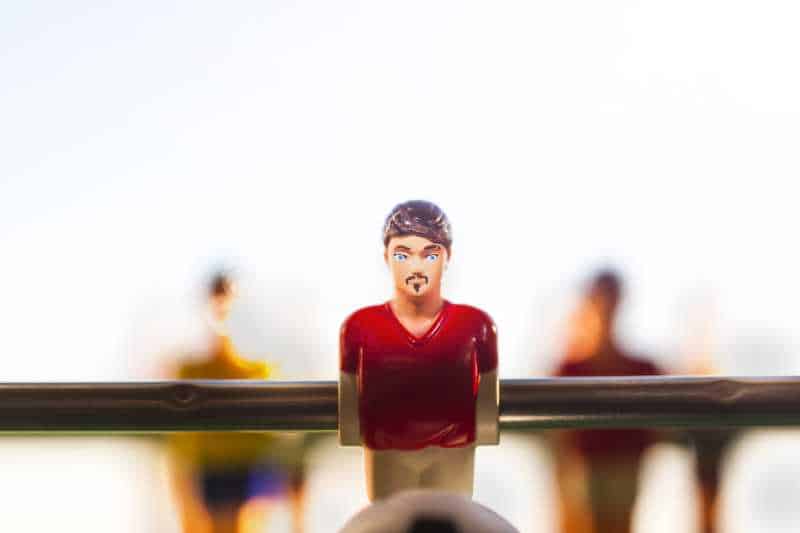 While it’s true that anyone can easily start playing foosball in the comfort of their own home without buying much special equipment, there is a lot more to foosball than first meets the eye, making it a new up-and-coming sport that is highly competitive and requires practice and dedication, just like traditional sports do.

Use These Links to Navigate this Guide >>
Is Foosball a Sport?
Foosball in the Olympics
What Are Foosball Players Called?
Who Invented Foosball?
Why Is Foosball Called Foosball?

Is Foosball a Sport?

Quick Answer: While some people disagree about whether or not foosball is a sport, it takes the same discipline as other sports for players to be successful. This means that even when it is played at a person’s home or in a local bar, it is just as much a sport as soccer, football, or baseball.

There are a few things that most people can agree upon about foosball, and that is that playing it takes skill, strategy, practice, and dedication.

Sports require players to repeatedly practice various moves and motions to allow muscle memory to take over and help them win the game. Foosball players rely on the same hours of practice and muscle memory to be able to really shine during competitions.

Some children grow up playing sports in their backyard, join local and school teams, and then grow up with dreams of playing their favorite sport professionally. Foosball players are no different and often spend the same amount of time, or more, practicing their hits, how to control the rods and players, and how to pass the ball back and forth to score. Unlike with other sports where players only have to learn how to play one specific position on a team, foosball players need to be able to play both offense and defense.

Because foosball players must both actively try to score a goal and prevent their opponent from scoring, this sport has a lot riding on the skill and practice of a player. Players can rely on brute force, but are often better off using skill and thinking through their moves to have the best chance of scoring, just like with traditional sports.

Solo or duo sports are popular all around the world. Tennis and golf, for example, allow athletes to participate by themselves or with a partner, and foosball is no different. It is a difficult sport that is easy to learn, but very hard to master, making it very similar to other sports that require years of dedication and long days and nights of practice.

Foosball in the Olympics

The first step in being included in the Olympics is to gain Observer status, which foosball did back in October 2017. After achieving this status, foosball now will be recognized as a sport as it reaches certain levels of participation and practice throughout the world.

Unfortunately for foosball fans and players, foosball has not been accepted for the 2020 Olympics. This sport is one of many that has gained Observer status, including pole dancing and poker. This means that foosball is one step closer to being included in Olympics in the following years, pending its ability to gain more players, participants, and support.

What Are Foosball Players Called?

In America, foosball players are known as “foosers.” A “fooser” can be someone who plays in the comfort and privacy of their own home or someone who enjoys tournaments and competitions across the United States.

There has long been debate about who actually invented foosball, particularly because the history is so murky and unreliable. Three men have all been credited with the invention of foosball: Lucien Rosengart, Alejandro Finisterre, and Harold Searles Thornton. While Rosengart and Finisterre are often credited with inventing foosball, most commonly people agree that it was Thornton who first patented the game in 1921.

In Spain, there are patents for games similar to foosball that are from the 1890s, however it wasn’t until 1932 when Thornton patented foosball as we know it in the UK. He noticed how popular football was becoming in Europe and wanted to make a game that people could play in the comfort of their own home that mimicked the play of football, but was smaller, affordable, and easily contained.

Rosengart claimed to have invented the game as a way to entertain his grandchildren during the winter, while Finisterre claimed to have come up with the idea while in the hospital. Whoever had the first idea for foosball, Thornton holds the patent and is often considered to be the inventor.

Why Is Foosball Called Foosball?

Foosball was inspired by the sport football, and bears many similarities, so it makes sense that it would have a name that is so similar. The name is more than just a typo or mispronunciation, however. In German, the word used for field soccer is “fuBball,” which means “football.” The “B” that is in “fuBball” is actually pronounced like there are two S’s back to back.

It’s because of the German name for this game and the way that it is pronounced that foosball has its name. Even though this is the most common English name for the game, there are many regional nicknames for foosball that are used all around the world.

In the UK, foosball is commonly known as “table football,” while players in Eastern Europe call it “kicker.” Foosball players who want to play a game in France will refer to the game as “baby foot.”

When you know more about foosball, how it is played, and the dedication that goes into playing this sport, it’s easy to see that foosball players are athletes who must train, practice, and rely on skill and strategy to win. It’s a highly competitive sport that is played all around the world, making it a great option for any curious foosball fan to try.