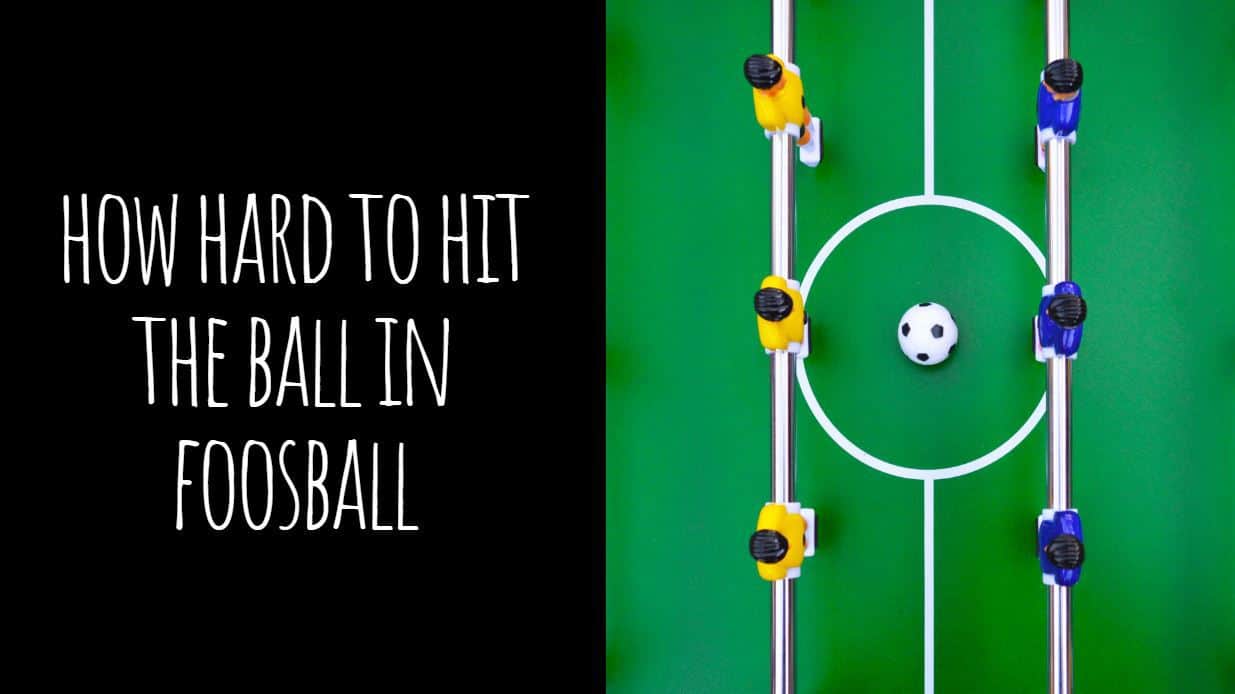 Like many other things, there’s more to foosball than meets the eye. Most people only ever casually play it, and they can hardly be expected to follow the rules closely then.

But there is actually a dedicated community in foosball. There are even professional players who make a living off of their skills.

If you’ve decided you’d like to get more serious about the game, you’ll need to develop a good understanding of the rules. One of those things is knowing how hard to hit the ball in foosball.

We’ll help you determine how hard to hit the ball in this guide. As a bonus, we’ll also discuss a few popular techniques people commonly use in their shots.

Use These Links to Navigate this Guide >>
How Hard Should You Hit the Ball in Foosball?
Different Types of Shots to Use in Foosball
Wrap Up

How Hard Should You Hit the Ball in Foosball?

There isn’t a rule telling you how hard you can hit the ball. That means you can smack it as hard as you possibly can, provided you don’t spin or send the ball flying off the table.

In fact, many serious players spend time researching how they can hit the ball as powerfully as possible.

Technique varies from player to player. But hitting the ball hard depends on holding the handle correctly and flicking your wrist.

Watch the video below for some tips on how to hit the ball even harder.

Different Types of Shots to Use in Foosball

There are many different ways to make a shot in foosball. If you watch a professional match, you’ll see all kinds of maneuvers that will make games look magical.

We’ll discuss a few of the most popular shots below, but this is by no means a comprehensive list. These are just some shots you can learn to step up your game as an amateur.

You can find more types of foosball shots here.

The pull shot is an excellent place to start if you’re a beginner. You use the offensive rod with three foos men on it to perform the shot.

Pull this bar towards you (which is where the shot gets its name from) and quickly flick your wrist to hit the ball once it’s lined up with the goal.

You can use this shot to drag the ball into the perfect position with your foosmen. Click the thumbnail right below to see a demonstration of the pull shot.

Contrary to the name, this shot doesn’t involve anything minty. The tic tac shot is named after the motion of passing the ball between foos men on the same bar.

When the ball is in the optimal position after being passed, you then fire the ball at the opposing goal. Ideally, you should spend some time passing the ball back and forth between foos men so you can execute this shot quickly.

Here’s a demonstration of how it works and what it looks like:

Like with tic tac shots, the name of spray shots is a little deceiving. You might think it means just frantically taking shot after shot towards your opponent.

However, it’s actually a carefully controlled movement. It means you are moving the ball diagonally across the field, towards the corner of the table or goal, rather than straight ahead.

This is a tutorial on how to do it:

This is perhaps a more complicated shot to take, because it does involve getting the ball airborne. The ball is caught between defensive foos men on the two bar, and then flicked at the opposite goal.

You can watch the below video to learn how to do this shot and see it in action.

As you can see, there is a lot of strategy involved in foosball. One viable strategy is figuring out how to hit the ball as hard as reasonably possible, because it’s difficult for your opponent to respond to.

But that’s not all. Aside from just hitting the ball hard, learning tricks like the shots mentioned above will help you win games.